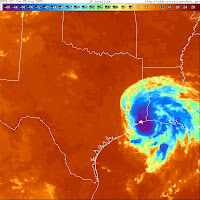 The 4am advisory just came out a few minutes ago, and Tropical Storm Edouard is now moving much faster, off to the northwest at 12 mph.

This puts the eye of Edouard now approximately 50 miles southeast of Port Arthur, TX, and about 85 miles east of Galveston, TX. Based on the current forward speed and direction, Edouard will make landfall later this morning somewhere between High Island and Sabine Pass.

Since it has taken on more of a northwest direction, that means we will start to see conditions go downhill rather quickly in Jasper and Newton counties within the next 3 to 6 hours. Outer rain bands are beginning to move into the Toledo Bend reservoir and will be moving into those locations this morning. We talked in our 10pm post about how most of these tropical systems in the northern Gulf like to turn towards the right and take on more of a northwestward track. That has indeed happened here, meaning landfall will be farther up the coast than what the official forecast track had been over the past 24 hours.
More than likely, most of East Texas will be placed under a Tornado Watch within the next few hours as rain bands become more numerous and overspread the area. This, along with heavy rain, and tropical storm force winds will be our main threat.
So, to recap the 4am advisory: Edouard has strengthened slightly from our last advisory as winds are now up to 65mph, moving to the west-northwest at 12 mph. Landfall will occur later this morning and weather conditions will be going downhilll rather quickly at that time.
I will be back with more updates as we get new information later this morning. Make sure your tanks are filled up and are prepared to ride the storm out. It should be a rather active day for many of us.