Adding to the Cold with a Winter Storm

Now that our frigid temperatures in place, all we need is a storm system to move overhead to give us winter precipitation. As it turns out, it looks like it will become reality tomorrow night and into the first half of the day on Friday. 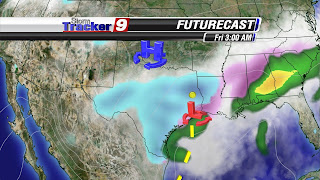 An upper level disturbance, or trough of low pressure, will move into the state on Thursday. As it gets closer, we will start to see some snow showers develop.
Our Futurecast computer model shows snow falling overhead on Friday morning at 3am, when many of you will be sound asleep.

It appears the winter precipitation will start Thursday evening, then pick up in coverage and intenstiy after midnight, lasting into the early morning hours on Friday.
If you noticed, I said wintry precipitation. That's because it may not just be snow that falls from the clouds, but some sleet and freezing rain are a possibility as well. 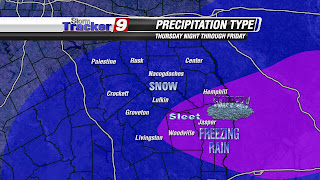 Whereas earlier in the week we thought it might be all snow, it appears now that we could be looking at a mix of snow, sleet, and freezing rain.
This diagram shows that most areas along and north of a Groveton to Lufkin to San Augustine line will probably receive just all snow.
However, that shade of pink represents where the snow could mix with sleet and freezing rain. If that happens, we would be looking at more significant impacts when it comes to power outages and icing of roadways.
That shade of pink includes areas in our southeastern counties, mainly areas around Zavalla, Colmesneil, Woodville, Jasper, and Pineland.
It should be noted that this area in pink could shift northward with future model runs and changes in the forecast.
If this area of mixed precipitation were to shift further to the north, then it could have a bigger impact on areas in Lufkin and Nacogdoches. These impacts would be icy roads, which would hamper travel, and possible power outages.
Please stay tuned to KTRE-TV and ktre.com for the latest developments on our approaching winter storm.